Precious and Base Metal Mineralization in a World Class Mining Region

Except as otherwise disclosed, scientific and technical information relating to the Eastchester-Fabie Property contained below is derived from, and in some instances is a direct extract from, and based on the assumptions, qualifications and procedures set out in the Technical Report entitled “Technical Report on the Eastchester-Fabie Property NTS Sheets 32D/06 and 32D/11, 48.46° N. Lat., 79.26 ° W. Long., for Beyond Minerals Inc.” with an effective date and issue date of August 31, 2021. The following summary does not purport to be a complete summary of the Technical Report. Reference should be made to the full text of the Technical Report, which is available for review under the profile of Beyond Minerals Inc. (the “Company”) on SEDAR at www.sedar.com.

The mineral titles that constitute the Property are located approximately 30km northwest of the city of Rouyn-Noranda, Québec. The Property includes three distinct claim blocks referred to as “Eastchester” located on NTS Map sheet 32D/11 in the municipality of Rapide-Danseur, and “Fabie” located on NTS Map Sheet 32D/06 in the municipalities of Rouyn-Noranda and Duparquet respectively. The claim blocks are generally proximal to Duparquet Lake which is the most apparent geographical feature in the area. The Town of Duparquet is the nearest settlement. The geographic centre of the three claim groups is approximately at 48.46 degrees North Latitude and 79.26 degrees West Longitude. 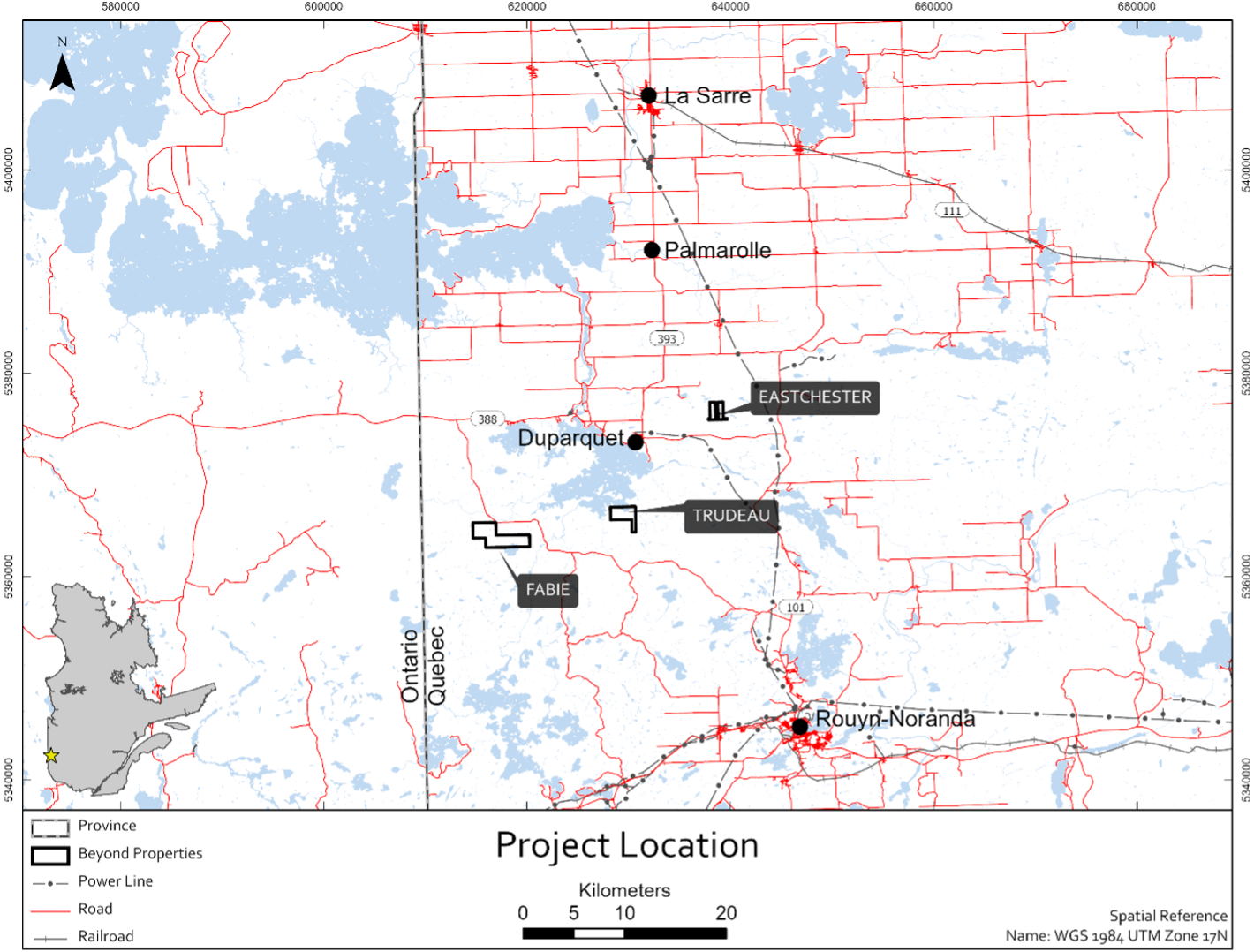 The Property consists of 37 mineral titles in three separate blocks. . All mineral titles were acquired by map designation under the Mining Act and are recorded 100% to Beyond Minerals Inc.. The Company obtained the Property through a transfer agreement with Reyna Silver Corp. (TSXV: RSLV) whereby 100% of the Property was acquired in exchange for 1,000,000 shares of the Company and a 1.0% NSR production royalty. There are no other underlying royalties registered against the mineral titles . 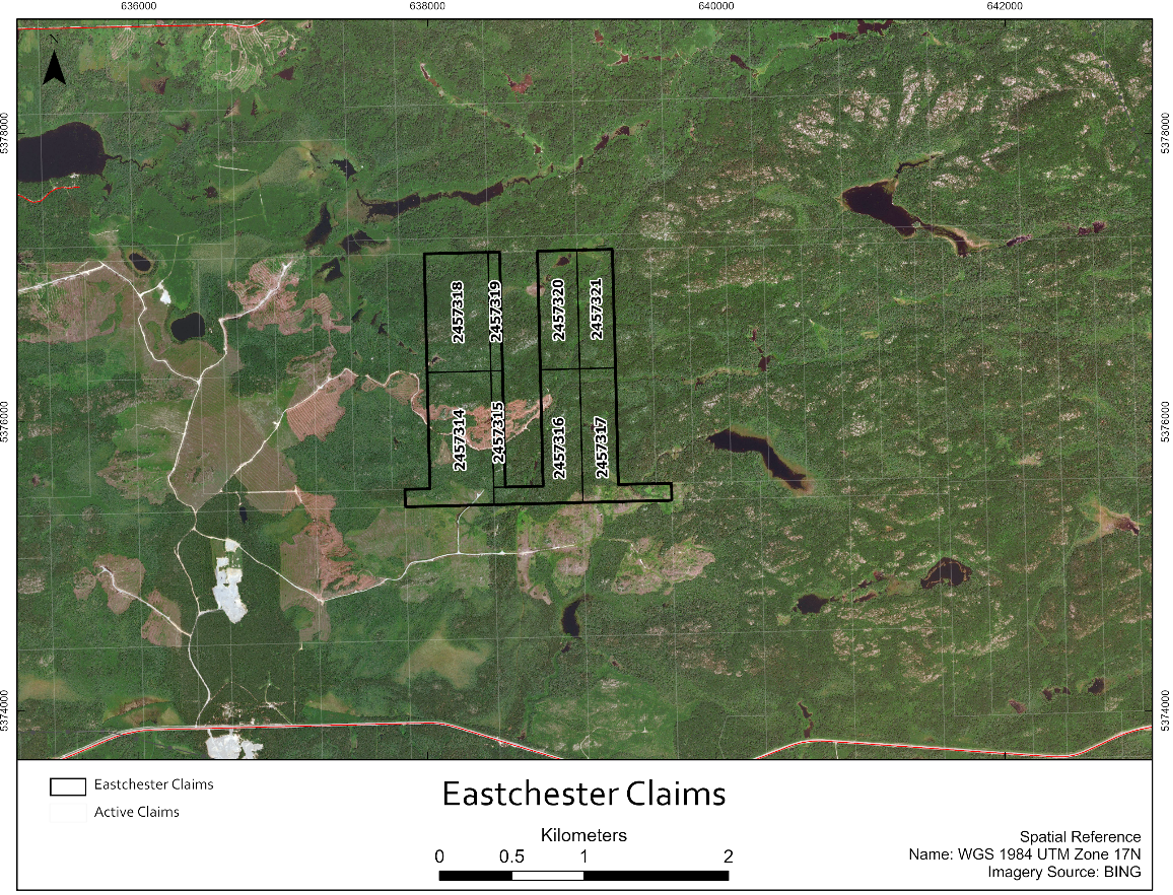 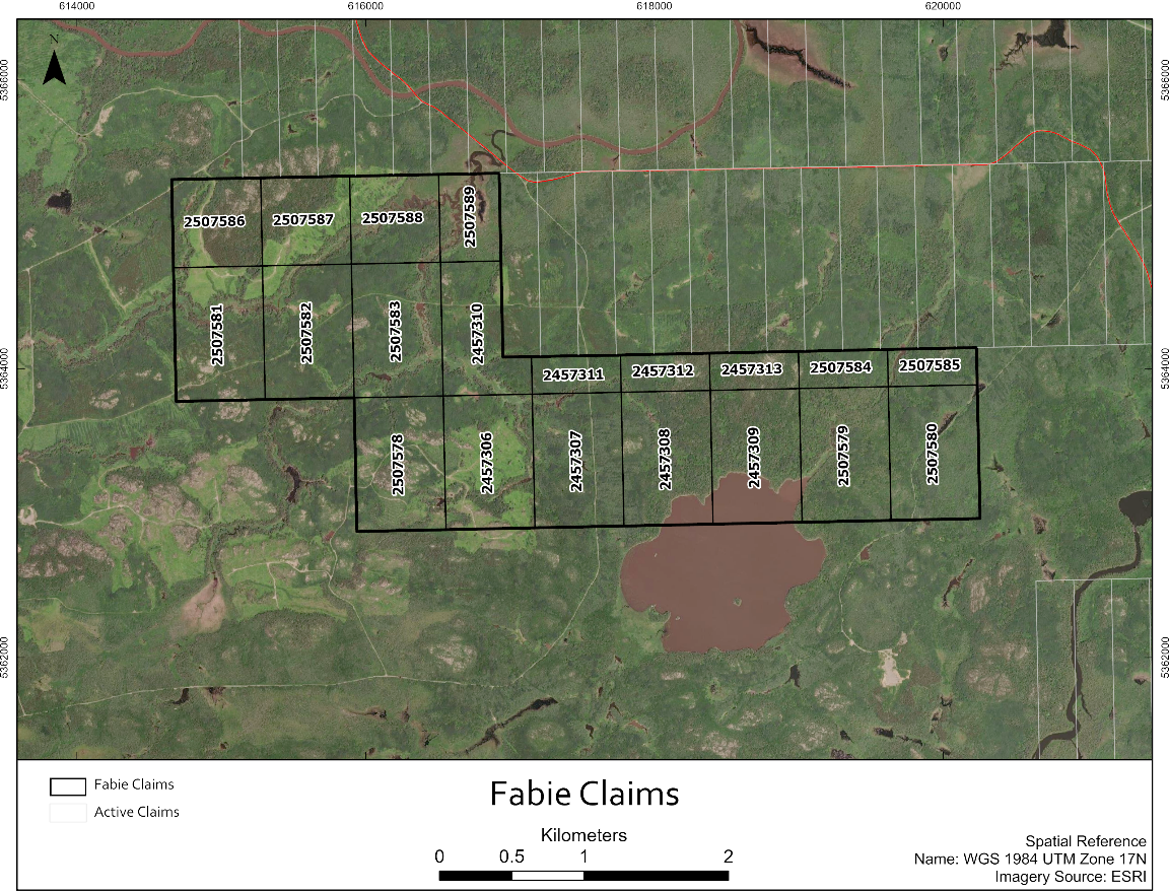 Prospecting began in the Duparquet area in the early 20th century and led to the discovery of dozens of surface gold showings and eventually mining of the Beattie, Donchester and Duquesne gold deposits along the Destor Porcupine Deformation Zone (DPDZ) through to the mid 1950’s. Gold exploration along the DPFZ resumed in the mid-1980’s and has continued to the present day.

In contrast, very little exploration was recorded in the area south of the DPFZ until 1972 following the release of an airborne electromagnetic survey (Questor Surveys Ltd., 1971) sponsored by the Québec Government that triggered a staking rush in the area. Surface work quickly led to the discovery and definition of the Fabie Bay (New Insco) and Magusi River (ISO) copper deposits. In 1974, Noranda Mines Ltd. consolidated the area through several purchase and lease agreements, developed a production ramp to the bottom of the Fabie Bay orebody and mined copper ore from a small open pit between 1976 and 1977. Exploration south of the DPFZ area has continued sporadically to the present day with most of the work being done at the Magusi River deposit.

The Property lies within the Abitibi Sub-province of the Superior Province of the Canadian Shield. The so-called Abitibi Greenstone Belt consists primarily of granitic intrusive rocks (~50%), felsic to ultramafic volcanic rocks (~40%) and sedimentary rocks (~10%) that have been mostly altered to greenschist facies metamorphic grade. Several anorthosite and ultramafic intrusive complexes have also been identified. These intrusions and layered rocks are all Archean and are cut by Proterozoic diabase dykes that were emplaced episodically at various orientations.

A network of Archean, regional scale, ductile to brittle-ductile deformation zones generally oriented, in chronological order, east to west, northwest and northeast divide the Abitibi Greenstone Belt into a mosaic of lozenge-shaped domains or terranes. These faults can be from several kilometres to several hundreds of kilometres long and are for the most part vertical or steep north dipping and are marked by intense schistosity that diminishes rapidly outside the limits of the fault zone. Foliations within the fault zones are often very complex and reflect several periods of movement and deformation.

Numerous geotectonic models have been proposed to explain the magmatic and tectonic evolution of the Abitibi Greenstone Belt. A model analogous to Phanerozoic orogenic processes is now generally accepted involving successive mobile collisions of volcanic island arcs and accretions of sedimentary basins from south to north (Chown et al., 1992). 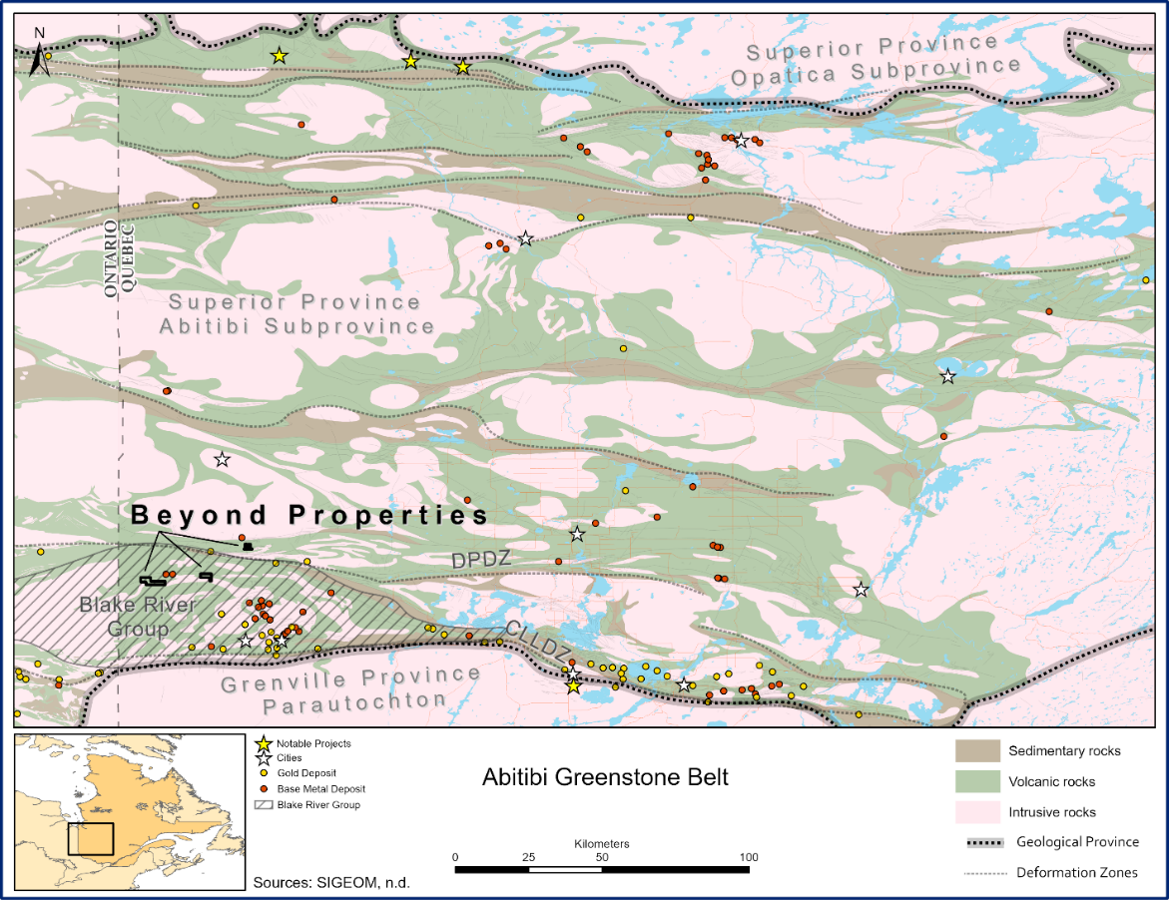 The project area staddles the Destor Porcupine Deformation Zone (DPDZ). This regional scale structure defines the major collisional contact between the older volcanic arc of the Northern Volcanic Zone (NVZ) and the younger arc segments of the Southern Volcanic Zone (SVZ) based on distinct volcano-sedimentary successions, related plutonic suites, and precise U-Pb age determinations described by Chown et al. (1992). The Eastchester block lies north of the DPDZ within the NVZ, whereas the Fabie blocks lie south of the DPDZ within the SVZ. The DPDZ is very complex with multiple parallel, divergent, convergent and splay structures along its length locally showing recumbent folding, thrusting or dip-slip movement and strike-slip or transcurrent movement (Mueller et al., 1996).

In the Duparquet area there is a band approximately two kilometres wide just north of the DPDZ that is occupied by a complex mélange of numerous thin turbidite, sedimentary and volcaniclastic formations, various small felsic intrusions and several small ultramafic ophiolites. This is typical of collisional volcanic arc boundaries. Moving southeast this band opens into a wider, less complex sedimentary arc basin. The areas north of this band are underlain by a more stable volcanic succession dominated by mafic to intermediate volcanic flows and related gabbro sills and dykes with lesser volcaniclastic sequences. The general trend of the rock units north of the DPDZ is east to southeast. 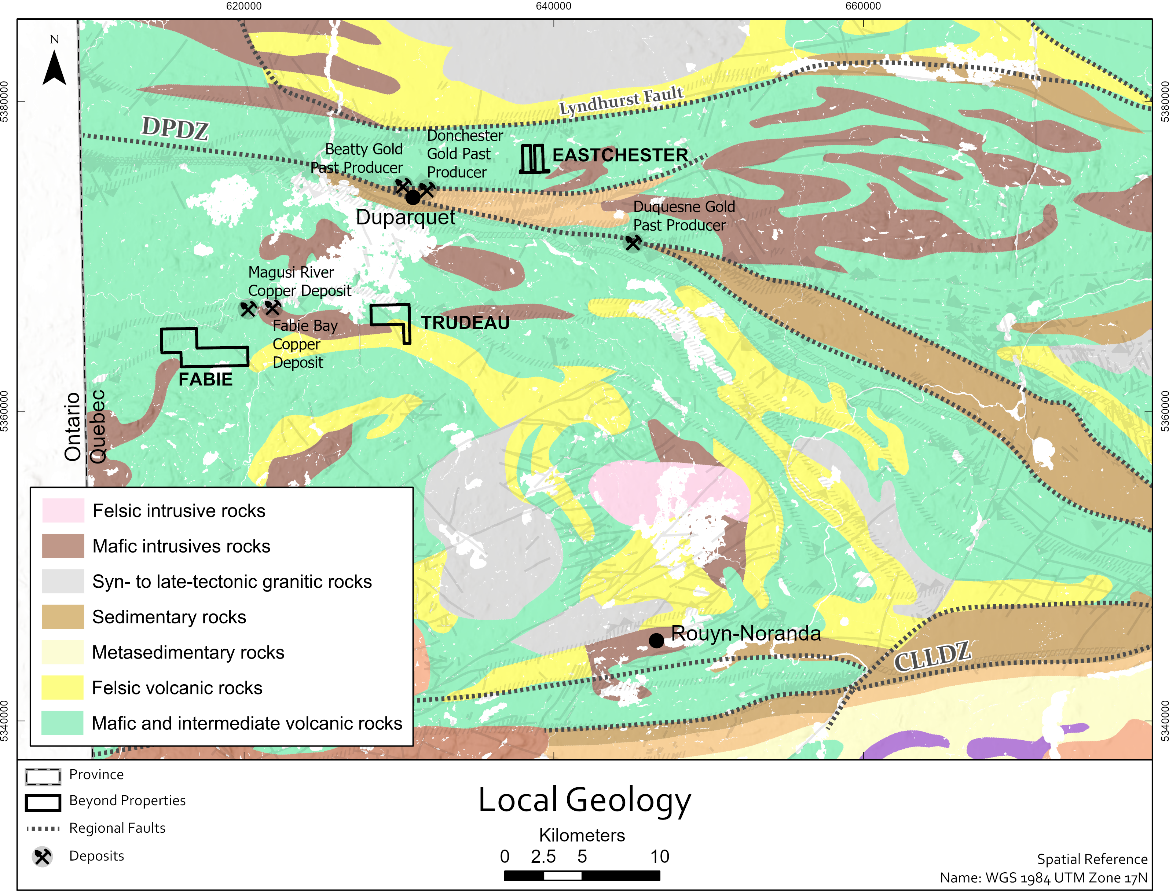 This extensive volcanic complex is called the Blake River Group (BR) and extends for 140km from Québec in the east to Ontario in the west and is 40km at its widest point north to south. The DPDZ forms the sharp north boundary of the BRC, and the Cadillac Larder Lake Deformation Zone (CLLDZ) truncates the BRC to the south. The BRC has been recently classified by Pearson & Daigneault (2009) as a subaqueous mega-caldera consisting of three successive caldera-forming events referred to as the early 3,000 km2 Misema mega-caldera, the younger 490 km2 New Senator caldera and the final 300 km2 Noranda caldera. The Noranda caldera, variously referred to as the Noranda complex, Noranda volcanic complex and the Noranda cauldron, is well known for its world class gold-rich, base metal deposits including the giant Horne Mine. Due to its economic importance, it has been studied and explored extensively and there is a daunting body of research papers dealing with it. Monecke et al. (2008) provides an excellent summary of its geological setting that includes a thorough synopsis of the research that over several decades has contributed to the present understanding of the Noranda caldera.

The Fabie claim blocks lie on the outer margins of the New Senator caldera. Unfortunately, the geological setting of this area has not been studied nearly to the extent that the Noranda Caldera has and consequently the area is not well understood. The Eastchester block lies north of the DPDZ and therefore outside of the BRC. There has been some exploration and research done at and around the Mobrun (Bouchard Hebert) deposit (Barrett et al., 1992 and Mueller et al., 2007). The somewhat similar position of Mobrun deposit and the Fabie blocks on the outer margins of the Misema mega-caldera suggests that Mobrun may be a better analogue for exploration within the project area rather than the Noranda mining camp deposits. Renewed research in the outer Misema mega-caldera (Sutton et al., 2017 and Sutton et al., 2019) may lead to better knowledge of the area.

A two-phase exploration program was recommended to identify, prioritize and test exploration targets on each of the three claim blocks with an emphasis of the Fabie block. Phase I of the proposed program will consist of surface work including data compilation and digitization, airborne MAG and TDEM geophysical surveys, prospecting and sampling on all three blocks, and a soil geochemical survey over the existing grid, trenching and structural mapping at the Lac Fabie Nord and Fabie NW showings on the Fabie block. Phase II will consist of drilling on the Fabie block. The proposed expenditures, including 10% for contingencies, are estimated to cost in $155,320 for the first phase of exploration and $247,500. Phase II is contingent upon positive results obtained in Phase I. Assuming both phases are fully completed, the total estimated cost is $402,820.